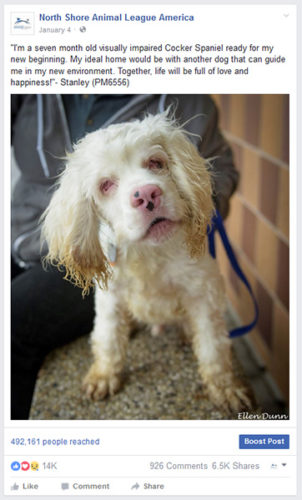 Every dog, cat, puppy and kitten that has ever been rescued and eventually adopted from our Port Washington, N.Y. Adoption Center has a unique story to tell. Since opening our doors 74 years ago, we’ve saved the lives of more than 1 million homeless animals, many of whom have inspiring tales of resiliency, courage, and overcoming adversity. But some stories, like that of Jamie, a Cocker Spaniel puppy rescued from a Midwestern commercial breeding facility with multiple disabilities, whose photo on one of our social media platforms placed him in the arms of his perfect human companion, simply stand alone as one of our proudest success stories.

Formerly named Stanley, Jamie was born with the double merle gene – a disorder caused by poor breeding practices often resulting in deafness, blindness, or in some cases, both because of lack of pigmentation. Unfortunately, Jamie was born deaf and blind, deeming him useless to the breeders of the puppy mill at just six months old. Luckily, he was surrendered to North Shore Animal League America’s Rescue Team and transported back to the safety of our no-kill campus aboard one of our Mobile Rescue Units. From that day forward, this handsome creature was afforded with nothing but the best resources our organization has to offer – from high quality veterinary care, to a shelter staff that treated him like a member of their own family – preparing him for the day he would meet the perfect adopter.

“Rescuing dogs and puppies from commercial breeding facilities is one of the most rewarding things we do here. Of course, all the lives we save are meaningful, but so many of these animals endure such pain and suffering that it’s vital we continue to do all we can to save them from euthanasia,” said Joanne Yohannan, Senior Vice President of Operations at Animal League America. “Jamie is just one shining example of an animal we were able to rescue from inhumane conditions, rehabilitate, and adopt into the perfect family.”

Jamie was adopted from North Shore Animal League America by Brenda Maeder on January 9, 2017. After continuously seeing his image on her Facebook feed, the Hyde Park resident decided that if anyone was going to provide this resilient dog with the pampered life he so desperately deserved, it was going to be her. As a longtime rescuer of Spaniels with disabilities and other life-threatening health issues – 28 and counting to be exact – Brenda was confident that she could not only care for the disabled pup, but just as she’s done with her four other current dogs, help him to overcome the odds and thrive as a four-legged member of the family. More than a year and a half later, we are thrilled to report that Jamie is doing just that!

“Jamie, or James as I like to call him from time to time, is your typical young and active dog with a lot of energy. He has no clue that he’s disabled and that’s all I could ever ask for him,” Brenda said. “Adopting a dog with special needs isn’t for everybody – it’s a lot of work and a long and steady process that is always ongoing – but I feel like this is my calling. He’s very trainable, so that helps, but I wouldn’t have it any other way. He’s such a special dog and a cherished part of the family.” 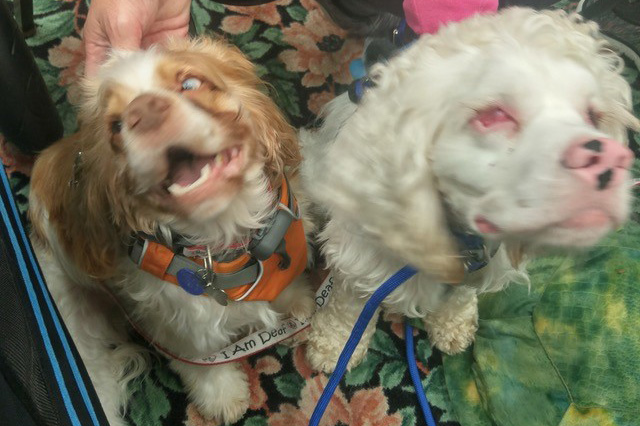 When he’s not cuddled in his mother’s arms or rolling over onto his back asking for belly rubs, Jamie is either noshing on his favorite snacks, which often include watermelon and cucumbers, or playing with one of his many toys. Brenda says one of Jamie’s favorite days of the month is when the BarkBox arrives because he knows he’s in store for a brand new treat.

“It’s so funny to see him patiently sit on the kitchen floor as I open the box. He’s like a little child on Christmas morning waiting to open his presents,” she said with a laugh. “I’m happy to spoil him because he truly is a delight and so deserving. Whatever I can do to show him that he’s loved, I’m going to do it.”

Not only does Brenda do all she can to show Jamie how much he means to her every day, but she decided to share his inspirational story with world in the form of a children’s book. Titled “Jamie’s Journey,” the book tells the story about the resilient Cocker Spaniel’s path to becoming the best possible version of himself through training, love and affection, and of course, help from all of the pals, both human and canine, he’s met along the way. 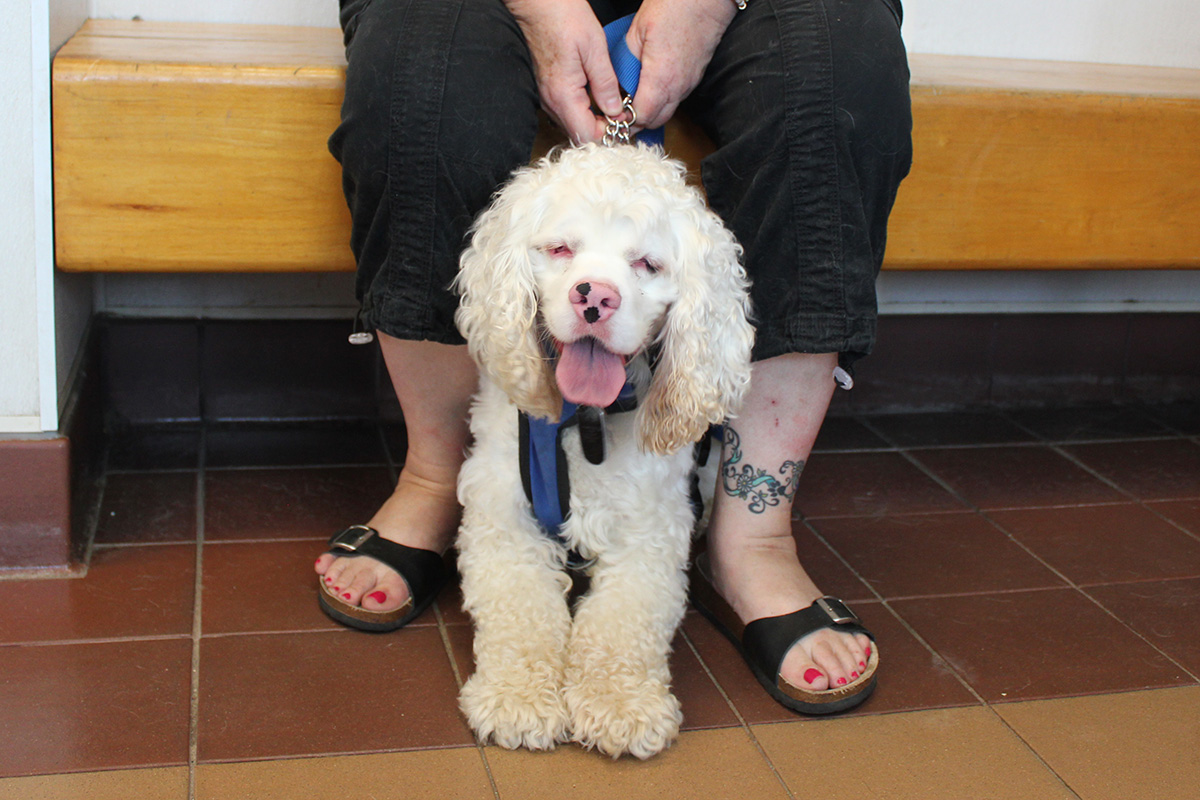 “Jamie’s Journey” is the story of a disabled pet that still has the right to be loved and live life to his full potential. My hope is that children reading this book, or having the book read to them, will see that Jamie is like everyone else,” Brenda writers in the introduction of the book. “He wants to do what everyone else does, even if it takes him longer, or he does it differently. It is the trying that counts.”

Thanks to the support of our generous donors, Animal League America is able to rescue thousands of homeless, sick, and injured animals each year and provide them with a chance to live healthy, fulfilling lives with families who adore them. If not for that constant support, Jamie’s inspiring story, and so many more like it, would never be possible. Thank you for joining us in being the heroes that these innocent animals need during their darkest days.

I call myself Nana Moses, because I am writing my first book in my retirement. I have always had a love of reading and rescuing dogs. Mostly dogs that other people would turn away from. Dogs who have been abused and have trouble trusting, older dogs no longer useful to the breeder that cared for them badly, and now Jamie. Jamie is blind and deaf, a product of bad breeding. The first 8 months of his life was in a cage, somewhere. He came with a host of issues and slowly, I have been working through them. Jamie was two when I published his story, he has a story to tell and it is one of wanting, trying and being loved. View all posts by jamiesjourneydoublemerlecockerspaniel